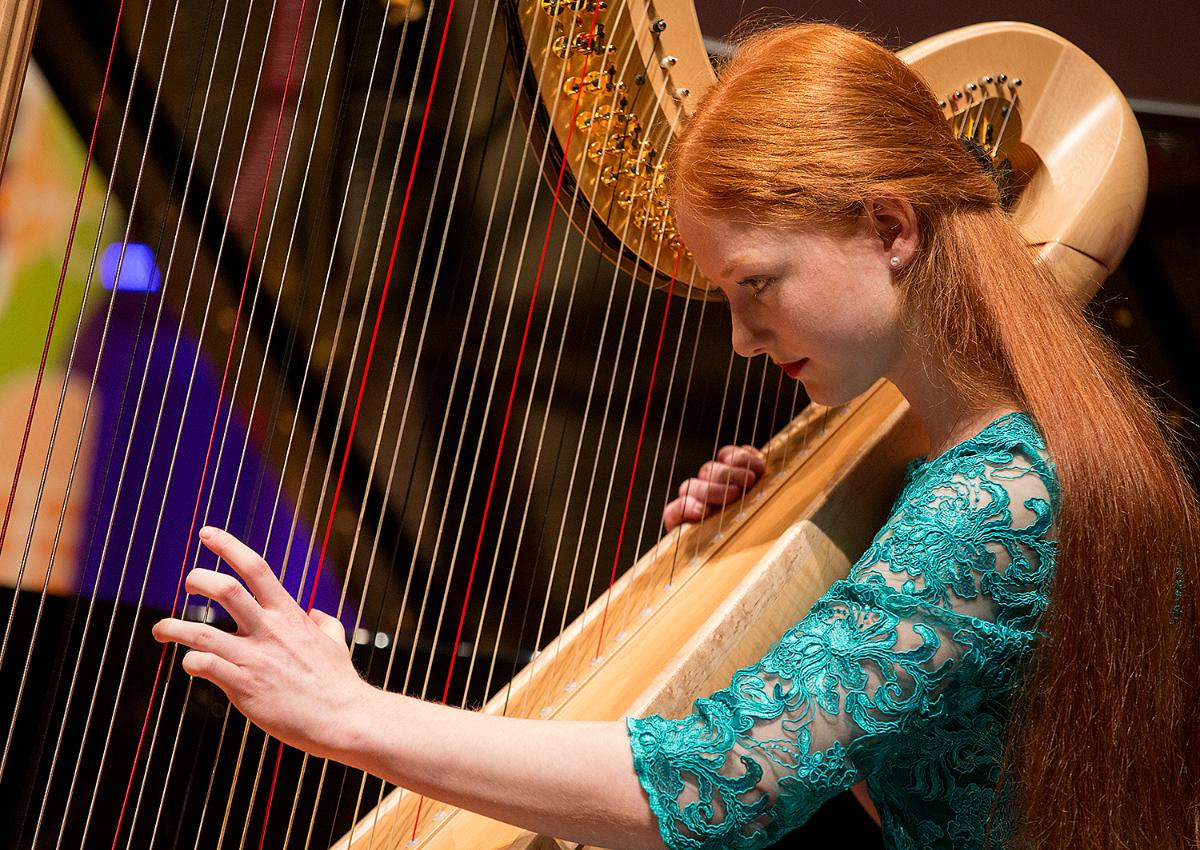 Inge van Grinsven (2000) was born in Nuenen and started playing the harp at the age of nine. In addition to her high school education she is studying the harp at the Young Musicians Academy of the Conservatory of Tilburg, since 2015. Her harp professor is Ernestine Stoop.
Inge was a semi finalist at the Royal Concert Hall competition in 2015. In 2016 she won the third prize at the O'Carolan harp festival in Ireland.
In 2017 she won the first prize of the Archipel Music Contest.
In the same year she won a second prize at the regional finals of the Princess Christina Concours in 's-Hertogenbosch. In 2017 she was a finalist of the Brabants Students soloist’s competition where she played as a soloist together with Orkest Zuid. She has won the second prize in that competition.
In 2017, at the international harp competition in Porto she won a second prize.
Inge is laureate of Classic Young Masters 2017, where she won the Sinfonia Rotterdam Award: a performance with Sinfonia Rotterdam with conductor Conrad van Alphen.
Inge has followed masterclasses with Remy van Kesteren, Manja Smits, Mirjam Schro?der, Sasha Boldachev, Milda Agazarian, Mara Galassi, Judy Loman, Sylvain Blassel and Ben Creighton Griffiths. She performed in the small Hall of the Concerthall Amsterdam, the Effenaar in Eindhoven, the Frits Philips Music Centre in Eindhoven, de Doelen in Rotterdam, the Gothic hall of the Council of State, during Festival “Muziek op de Dommel” in Eindhoven, in theatre “Het Klooster” in Nuenen, “de Schalm” in Veldhoven, the Jan van Besouw Chapel in Goirle, in Castle Dussen and in churches and nursing homes.
In addition, she has performed several times with the Blue Planet Harp ensemble, conducted by Inge Frimout – Hei, the teacher with whom Inge started her harp study at the age of nine.
Inge really enjoys playing on the harp and the piano and she likes drawing and figure skating.

Concerts in 2018 of Inge van Grinsven