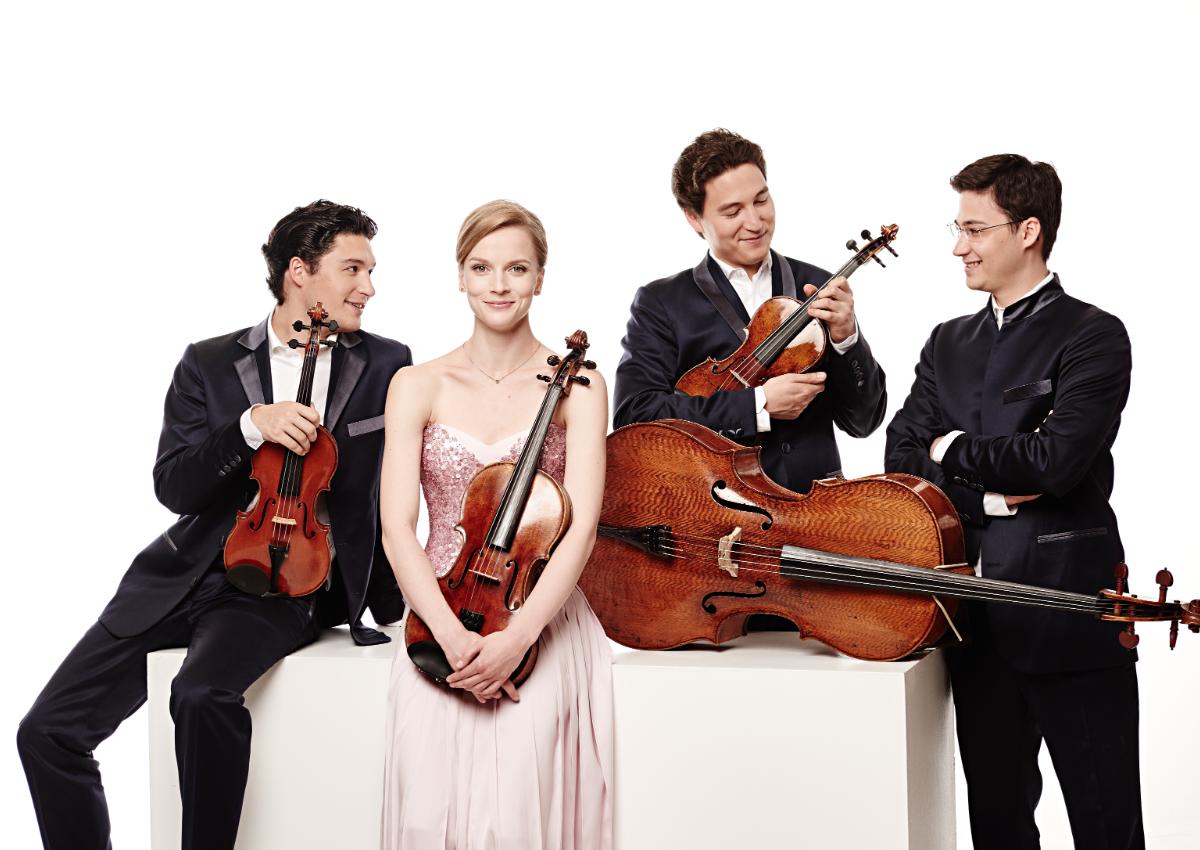 "Personal and profound" (BBC Music Magazine): "With no ifs or buts, the 'Schumanns' are among the best quartets in the world" (SZ) and certainly "one of the most exciting string quartets of the present day" (Fono Forum)

The Schumann Quartet has reached a stage where anything is possible, because it has dispensed with certainties. This also has consequences for audiences, which from one concert to the next have to be prepared for all eventualities: “A work really develops only in a live performance,” the quartet says. “That is the 'real thing', because we ourselves never know what will happen. On the stage, all imitation disappears, and you automatically become honest with yourself. Then you can create a bond with the audience – communicate with it in music.”

This live situation will gain an added energy in the near future: Sabine Meyer, Menahem Pressler, Albrecht Mayer, Kit Armstrong, Edgar Moreau and Anna Lucia Richter are among the quartet's current partners. A highlight in the 17/18 season is still its three-year residency at the Chamber Music Society of the Lincoln Center in New York City, which began back in December 2016. The quartet will go on a USA tour and give guest performances at festivals in South America, Italy and Switzerland as well as at the Mozart Week in Salzburg. It will also perform concerts in the big musical metropolises of London, Hamburg, Berlin, Amsterdam, Florence and Paris. In addition, the ensemble is “artiste étoile” at the Mozartfest in Würzburg and at the “Oraniensteiner Konzerte” concert series and is looking foward once more to the two concerts it will give as part of its long-term residency at the Robert-Schumann-Saal in Düsseldorf. Its current album, LANDSCAPES, in which the quartet traces its own roots by combining works of Haydn, Bartók, Takemitsu and Pärt, has been hailed enthusiastically both at home and abroad, among other things receiving the “Jahrespreis der deutschen Schallplattenkritik”, five Diapasons and being selected as Editor's Choice by the BBC Music Magazine. The Schumann Quartet was already accorded the 2016 Newcomer Award at the BBC Music Magazine Awards in London for its previous CD “Mozart Ives Verdi”.

The three brothers Mark, Erik and Ken Schumann have been playing together since their earliest childhood. In 2012, they were joined by violist Liisa Randalu, who was born in the Estonian capital, Tallinn, and grew up in Karlsruhe, Germany. Those who experience the quartet in performance often remark on the strong connection between its members. The four musicians enjoy the way they communicate without words: how a single look suffices to convey how a particular member wants to play a particular passage. Although the individual personalities clearly manifest themselves, a common space arises in every musical work in a process of spiritual metamorphosis. The quartet's openness and curiosity may be partly the result of the formative influence exerted on it by teachers such as Eberhard Feltz, the Alban Berg Quartet, or partners such as Menahem Pressler.

Teachers and musical partners, prestigious prices, CD releases – it is always tempting to speculate on what factors have led to many people viewing the Schumann Quartet as one of the best in the world. But the four musicians themselves regard these stages more as encounters, as a confirmation of the path they have taken. They feel that their musical development over the past two years represents a quantum leap. “We really want to take things to extremes, to see how far the excitement and our spontaneity as a group take us,” says Ken Schumann, the middle of the three Schumann brothers. They charmingly sidestep any attempt to categorise their sound, approach or style, and let the concerts speak for themselves.

And the critics approve: “Fire and energy. The Schumann Quartet plays staggeringly well [...] without doubt one of the very best formations among today’s abundance of quartets, […] with sparkling virtuosity and a willingness to astonish” (Harald Eggebrecht in Süddeutsche Zeitung). So there is plenty of room for adventure.

Quotes taken from an interview with journalists from the online classical music magazine VAN (van-magazin.de)