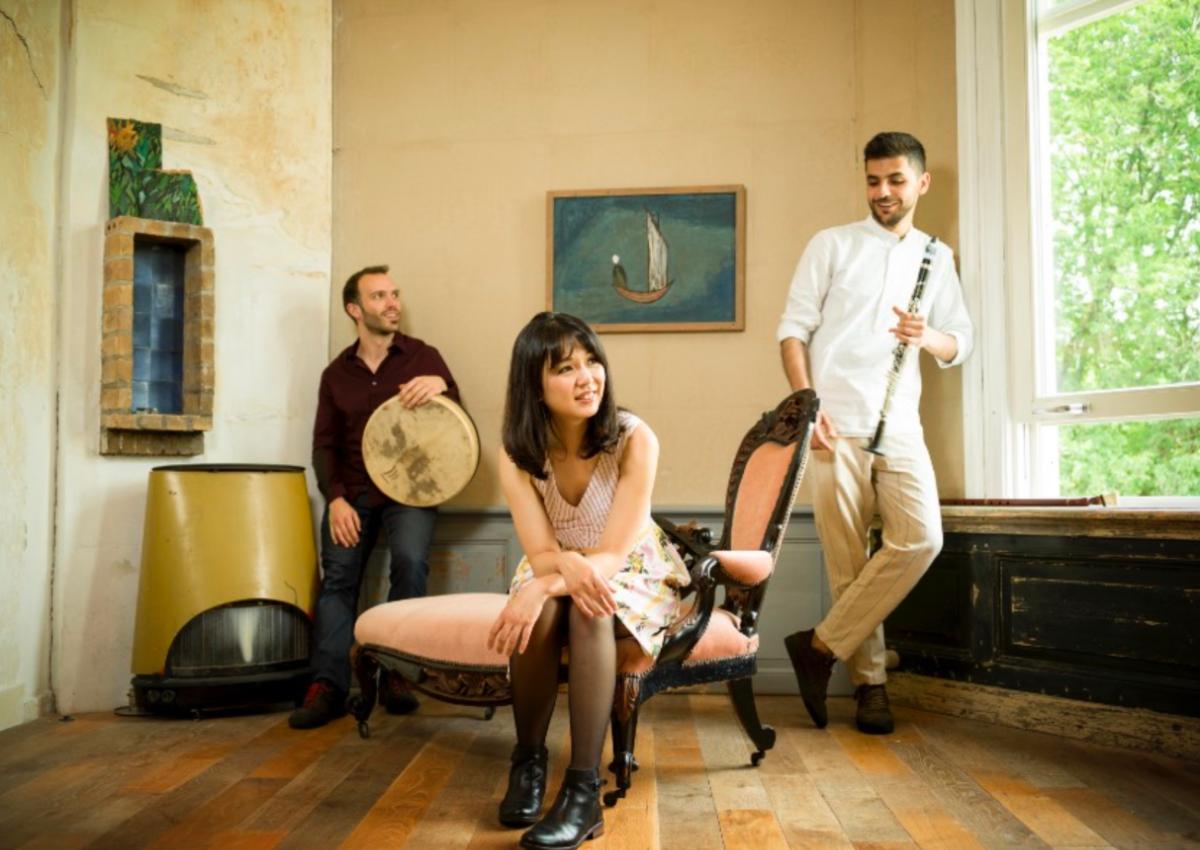 The trio explores and combines music styles from diverse cultural backgrounds, ranging all the way from the Middle East, through the Balkans, reaching Jazz and touching Latin music. With their own compositions and arrangements, Dafa warms the heart in times of crisis in order to unite people and to show the beauty of multiculturalism and the strength of diversity. The combination of Ghaeth’s captivating melodies accompanied by Chi’s intimate harmonies and Erik’s spicy rhythms creates a mesmerising musical journey for listeners, taking you on a voyage whilst making you feel at home.

Ghaeth Almaghoot is a clarinetist from a small city called Salamiyah, Syria. He did not start his journey with music as a child, it was later at age 21 that he first began playing the clarinet. He moved to live in The Netherlands in 2015 after fleeing the war in Syria; making a new start as both a student and musician under the guidance of his teacher, Alex Simu. Ghaeth is a graduate from the conservatoire of Rotterdam, Codarts class of 2020, and is currently doing his Masters degree centred around Ethnomusicology at Codarts Rotterdam. Ghaeth has been involved in many different projects during his career, currently performing with Atmaca, L’Chaim and Dyar Band.He has been fortunate enough to tour to many countries with his music (Mexico, Poland, Italy, Switzerland, France, Austria, Sweden, Belgium, Turkey, Germany) and has played alongside great artists such as Lena Chamamyan, Ellen ten Damme, Netherlands Blazers Ensemble, Konrad Koselleck Big Band, Paul de Leeuw and many others. "His clarinet style adopts many different genres and his tone is as expressive and moving as a vocal line" - International Music Meeting Festival 2018.

Chi is a female pianist and composer born and raised in Hong Kong and Macau. She received her higher classical education at the Chinese University of Hong Kong, New York Manhattan School of Music, and Jazz in Rotterdam Conservatory (Codarts). Given the multi-cultural background, Chi's musical styles range from classical and jazz to Scandinavian jazz. Her own compositions, which encapsulate her diverse musical influences: heart-melting classical melodies colored by the intricate jazz harmonies, Indian and European folk rhythm elements intertwine with skillful Jazz improvisation. Chi is working on her first album which is the emblem of her long-standing fascination with the music of different worlds. Her music is simply embracing herself, go beyond any definition, and touch every soul with tenderness.

Erik Larrea is a Spanish-Luxembourgish drummer, percussionist and music educator. Specialised in Latin music and various styles of world music, he graduated from Codarts Rotterdam, the Netherlands with a Masters in Music (MMus) Cum Laude. Meanwhile, he also worked as a teacher at the Xinghai Conservatory of Music in Guangzhou, China, mainly as a music teacher and coordinator of the conservatory's World Music department from 2017 to 2019. Erik performs regularly with several groups and projects in the Benelux. As a drummer and percussionist he has shared the stage with international musicians and ensembles such as pianist Carlos Matos and percussionist Nils Fischer with CaboCubaJazz, pianist Carlos Cippelletti with Hybrid/C, the Noordpool Orkest, the Afro-Cuban folk ensemble Ilu Egbe, singer Alberto Caicedo, singer Marly Marques, drummer Lucas van Merwijk, pianist Franz von Chossy, pianist Deng Yameng (邓亚蒙) and others. He is the founder of Nueve Rayos Salsa band, founding member of Kikun Osupa Batá trio and the Apacay quintet. Recently, Erik has co-founded Dafa, a cross-over trio experimenting with Balkan, Middle-eastern and Jazz music.