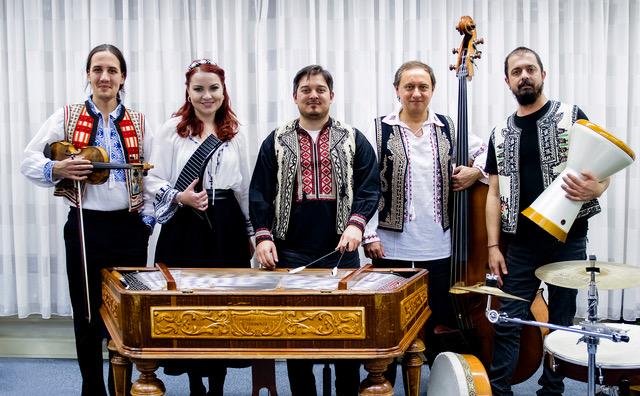 Mariana Preda (panflute): Mariana Preda is a Pan Flute musician. Born and raised in Romania, she enrolled at the Music School of Targoviste. She graduated in "Classical Panflute" at the Conservatorium Van Amsterdam in The Netherlands under the guidance of Professor Matthijs Koene with whom she now studies her Masters. Mariana performed in different venues all over the world, promoting contemporary and folk music in a different set of ensembles.

Gabriel Barbalau (double bass): From the age of 10, Gabriel Barbalau studied the cello at the college of music “George Enescu” in Bucharest, Romania. However, his great skill on the double bass also made him join, at the age of 19, to the state folk ensemble “Ciocarlia”. In this way he became acquainted with the prominent musicians of Romania, as well as with pan flute player Nicolae Pirvu with whom he came to the Netherlands. Here he obtained his diploma for classical double bass at both the Royal Conservatory of The Hague and the Sweelinck Conservatory of Amsterdam. Since then he has been active both nationally and internationally in various symphony orchestras, chamber music and world music projects.

Dani Luca (cymbalom): With Dani Luca (1984, Romania) traditional folk music and gypsy music were introduced by his father, uncle and grandfather. The attraction especially to the instrument "cimbalom" started at an early age and turned out to have talent (feeling) for this instrument at a very young age. Living in the Netherlands since 1990, Dani started studying cimbalom under the guidance of his father and also regularly received masterclasses from famous virtuoso cimbalists, including Giani Lincan.

Noa Eyl (1988, Amsterdam). Knew he wanted to be a fiddler since he was 2 years old, but only started
playing when he was 5 with the "Fancy Fiddlers" of the teacher Coosje
Wijzenbeek. Learning everything the classical way and doing this successfully, he
expanded his boundaries in improvising art. Playing with tango, Roma, circus, theater, baroque, Irish/American, Dutch
Rockband, jazz, Klezmer and many more, ensembles all over Europe and
beyond. Always looking for something new. Noa plays on a violin build in 1783 by; Withalm Lauten (Nürnberg) Provided
by het Nationaal Muziekinstrumenten Fonds (NMF).

Alper Kekec (1975) was born in Istanbul, Bakirkoy. Alper has moved to Trakya (North-West part of Turkey) with his family and lived there until the age of 18.

After finishing the Highschool he moved to Izmir. He was first introduced with music at early ages and instead of playing guitar as many youngsters do, he continued playing Baglama (Turkish folk guitar) after a mandolin education at school. In 1995 he entered to Ege University Conservatory and studied "tar" (Azerbaijan’s folk guitar).
After a while, he started playing percussion instruments and went on his music career with rhythm instruments. He has recorded 2 albums with a band called "Umuda Ezgi" He has played percussion and drum in many music styles.  Now he is a teacher at Rotterdam Conservatoire and going on working as a concert musician.