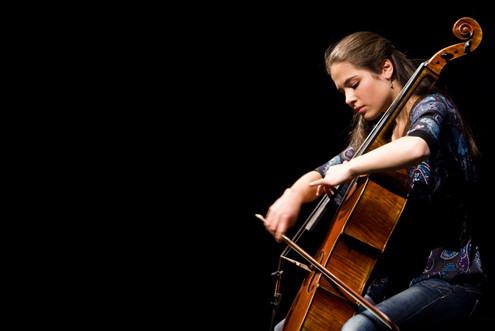 Cellist Liesbeth Bosboom (1995) plays in the Schellingwouderkerk. She is currently in the second year of the master's degree at the Royal Conservatory, in addition to following the orchestra's master's degree in the Residentie Orchestra. In June 2017, Liesbeth graduated with a 10 at the Prince Claus Conservatory in Groningen with Jan-Ype Nota. She attended masterclasses with Richard Aaron, Xenia Jankovic, David Strange, Kian Soltani and Shmuel Magen, among others.

As a soloist, Liesbeth gave concerts in various halls in the Netherlands, Germany, Sweden, France, Spain and Taiwan. Liesbeth played solo with various orchestras, including the Netherlands Chamber Orchestra and various youth and student orchestras. She also likes to play chamber music in various ensembles. She played with Emmy Verhey, Nata Tsvereli and Rosanne Philippens, among others. Liesbeth is the regular cellist of the Chamber Orchestra of the North. In the summers of 2017 and 2018, she was also the leader of the cello of the National Youth Orchestra. Since 2018, Liesbeth has been a substitute for the Rotterdam Philharmonic Orchestra.

The Kerkjesroute is a wonderful cycling tour through Amsterdam Noord. Along the way you stop at three picturesque churches for short concerts by SAKS (saxophone quartet), cellist Liesbeth Bosboom and the Willem Romers Trio. The starting point is the Nieuwendammerkerk. There you will receive the route and the entire program of the morning and afternoon. Take your own bike with you!